"Your pottery is very Game of Thronsey" - Historical artwork, my work and popular media

I just got a text from my son telling me that in the Game of Thrones episode "Valar Morghulis" (season 2 episode 10) one of the characters has a knife with a face on it that looks like one of my beads. I am happy he put it that way, people usually say my work looks like whatever they saw (and I must have copied that). I have a great son, he is smart and has better eyes than I. Osha the Wildling is pictured with a knife which has a hilt decorated with the same image I copied for my "Warped Warrior" bead. I first made that bead about 20 odd years ago as a student and its based on a Celtic warriors face from a mug or a sword or something. Too long ago, and I probably still have the book, but I have a lot of books. 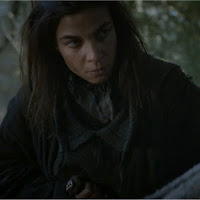 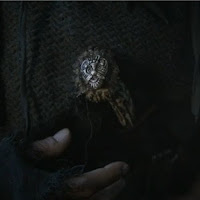 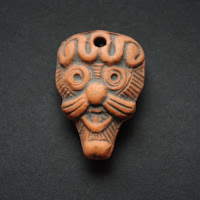 When The Lord of the Rings was in the theatres people said my work was very "Lord of the Rings". When Gladiator was out my work looked Roman, according to customers. Harry Potter, Rome, Stargate, Caprica, Spartacus, etc., you name it my work has been compared to it, I just sit back and giggle. People have always naturally assumed that my work is copied from the popular media but truth be told, my work has always been the same, evolving naturally of course but it has never been influenced by the popular media.

I have studied historical imagery and cultures quite rigorously over the past 25+ years. The resulting artwork is a modern interpretation of that. I am flattered everytime my work is compared to something popular. I am trying to get my work into movies and such, I have even offered to bribe a set dresser that I know. :-)

Kudos to the Game of Thrones prop guys for looking at historical work, for people like me it makes it easier to slip into their world while watching the show.
Posted by Trespasser at 2:18 PM 0 comments